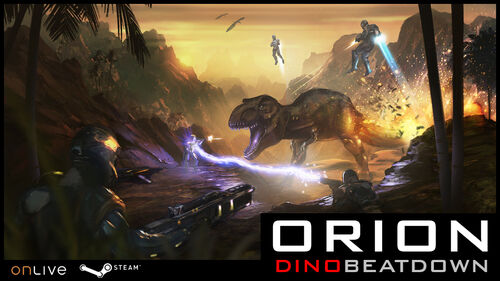 Visit our Orion Dino Beatdown Wiki:Community Portal for how to help out!

Orion: Dino Beatdown is a Steam game released on May 4th, 2012 by Spiral Game Studios [hereafter referred to as SGS]. There is also a pending-release with OnLive. Initially the game was to be release April 20, 2012, but for various reasons, was postponed. Orion is a game devised by David Prassel, Founder of SGS. In conjunction with a KickStarter campaign, the Indie Game was allowed to prosper from the funds gathered through pledges. Initially Orion was a Source Engine Mod, and gradually as David Prassel wrote design documents, it became something far greater. It transformed into a series of planned games involving a deep sci-fi universe, filled with dinosaurs on alien worlds, waiting to be discovered.

With large ambitions and a small team, SGS set out to create something fathomable for fans to get a hold of in a reasonable time frame. After a couple years of development, Orion: Dino Beatdown became that product. This first iteration of Orion is a 5-player online co-op game intended to give a taste of the Orion Universe, borrowing many gameplay ideas, yet excluding the story; leaving intact the core vision of Orion for future installments. What Orion: Dino Beatdown lacks in story, it makes up for in gameplay, allowing players to adapt to the franchise before it's even scratched the surface of its' artistic capabilities. This gives players an opportunity to experience vast landscapes roaming with both dinosaurs and humans, each struggling for their individual and collective survival.

Players start the game out at a random base, where they must activate the generator (by pressing 'E' beside it) in order to activate the wave. Players must then fight off hoards of Raptors, T-rexes, and Rham's (flying dino's resembling pterodactyls). Aside from attacking players, the oncoming dinosaurs attack the activated generator, the core power to all buildings at a particular base (Armory, Barracks, and Garage). Players gain credits from killing dinosaurs, and If a generator goes offline from attack, players no longer have the ability to purchase things with their credits. This situation can be fixed through powering the generator back online [holding 'E' when beside it], by staying defended long enough to finish repairs. If players stay alive through enough waves, their base will lose power and they will have to move out to another base, killing roaming dinosaurs and exploring the respective world on their way. Once at a new base, players must then activate the generator to continue through the same process of dinosaur waves, once again opening up the ability to purchase gameplay-enhancers at various buildings. This includes everything from VTOL's, mechs, hover bikes, weapons, upgrades and more.

In a game of multiple people, players will respawn during the next wave as long as 1 or greater players survive to kill the remaining dinos. If all players are eliminated, the team is defeated and must start again from the ground up. This means any credits, upgrades, etc. aren't available from the get-go. Players must be careful whilst alive, as any death will incur in the loss of purchased add-ons to their character (abilities & weapons). In order to survive, individuals must be wary of the unique form of attack that each dino uses.

Community content is available under CC-BY-SA unless otherwise noted.
Advertisement